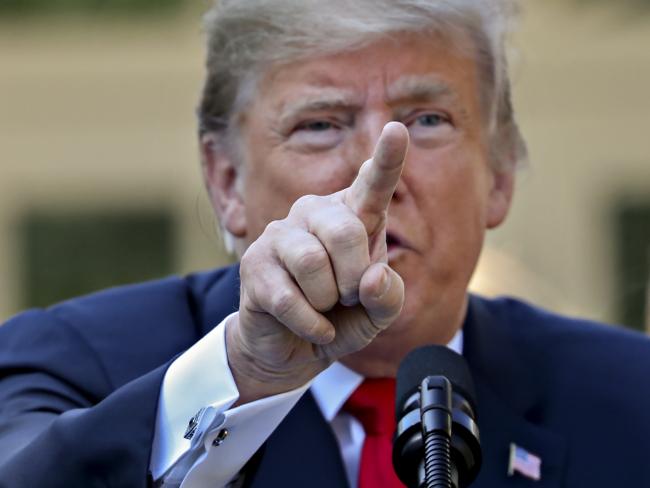 © Bloomberg. U.S. President Donald Trump speaks on the U.S.-Mexico-Canada Agreement, or USMCA, in the Rose Garden of the White House in Washington, D.C., U.S., on Monday, Oct. 1, 2018.

(Bloomberg) — President Donald Trump slammed the Federal Reserve for high interest rates in a tweet on Tuesday, complaining the euro and other currencies were “devalued” against the dollar.

“The Fed interest rate way too high, added to ridiculous quantitative tightening! They don’t have a clue!” Trump said on Twitter, renewing his complaints about the U.S. central bank a week before it meets in Washington to discuss monetary policy.

Trump’s tweet on the euro appeared to have been prompted by a Bloomberg Opinion piece on Europe bracing for a summer of “overtourism,” to which the president linked as he refreshed his vexation over the dollar’s value against its rivals.

Kudlow said Trump was making a different point, that “we need to have some assurance — we have G-20 coming up and G-7 after that — of world currency stability. That beggar-thy-neighbor policies using cheap money, devaluing currencies, is not a good policy.” Leaders of the Group of 20 will gather June 28-29 in Osaka, Japan.

The Trump administration last month signaled intent to turn the $5.1 trillion-a-day global currency market into the next battlefield of his trade war with a Commerce Department plan that would allow the U.S. to apply countervailing tariffs on nations seen to be actively driving down their currencies to boost exports.

U.S. Treasury Secretary Steven Mnuchin, speaking in an interview Saturday in Fukuoka, Japan, where he was attending a G-20 meeting of finance ministers and central bank chiefs, said the proposal does not signal a preference for a weaker dollar.

The president also tweeted that the U.S. has “VERY LOW INFLATION,” calling it a “beautiful thing!”

U.S. inflation was 1.5% in April, according to the Fed’s preferred gauge, and has been under its 2% target for most of the last seven years.

Fed officials meeting June 18-19 are expected to debate the need for an interest-rate cut to shelter the U.S. economy from fallout caused in part by Trump’s escalating dispute with some of the U.S.’s largest trading partners. Investors see a 75% probability of a quarter-point cut in July.

Trump’s complaints are his latest taunts of the Fed, shattering a nearly three-decade White House tradition of public silence on monetary policy out of respect for Fed independence.

On Monday Trump vented in a CNBC interview that the U.S. central bank doesn’t “listen” to him and contrasted its lack of obedience with the control that Chinese President Xi Jinping wields over the People’s Bank of China.

Jerome Powell, whom Trump appointed as Fed chairman last year, has refused to respond to the president’s criticism and repeatedly stressed that policy makers will ignore political pressure as they set policy to support maximum employment and stable prices.