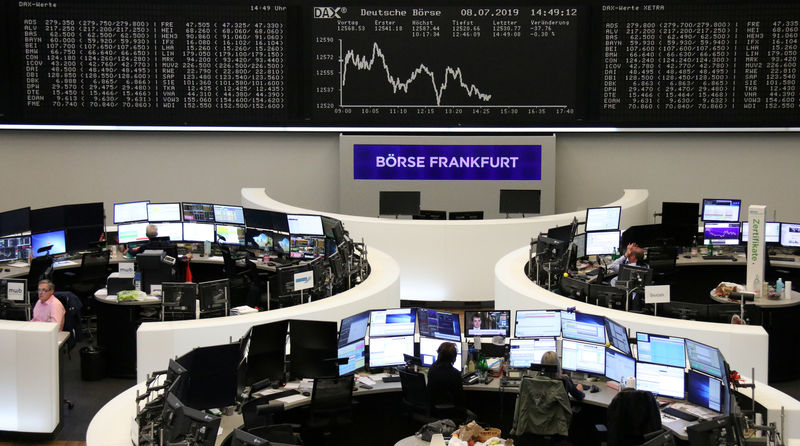 LONDON (Reuters) – Second-quarter earnings in Europe could turn be a reality check for the stock market after its biggest rally in more than two decades.

European stocks () have risen 15% so far this year, fueled by hopes for a U.S.-China trade truce and by a shift to dovish monetary policies at U.S. and European central banks.

Investors will now check the pulse of corporate Europe as the second-quarter results season gets under way. Europe’s most valuable technology company, SAP (DE:), semiconductor company ASML (AS:) and Swiss drugmaker Novartis (S:) are all due to report next week.

With valuations stretched in many sectors and signs that the gains are running out of steam — the pan European STOXX 600 () is set for its first weekly drop in six weeks — positive earnings will be critical to sustain the rally, analysts, strategists and asset managers said.

With some growth and quality sectors “priced for perfection”, investors may not be in a forgiving mood if results disappoint, said Barclays (LON:) Capital equity strategist Emmanuel Cau.

“What I fear is we have more companies saying, well, we got through the first half but we have got no idea what’s happening in the second half,” said Neil Dwane, global strategist and portfolio manager at Allianz (DE:) Global Investors.

“And then the market is going to say ‘Blimey! Why am I all the way up here if I can’t see the rolling hills of 11% earnings growth in the next 12 months’.”

Companies listed in Europe benchmark STOXX 600 will report earnings growth of 0.8% for the quarter, according to the most recent consensus compiled by I/B/E/S Refinitiv.

It’s also down from growth of more than 3.6% expected for the quarter two months ago. In the past week alone, 1 percentage point has been cut from the consensus.

A warning this week from BASF (DE:) sent shivers through stocks, underscoring concern about the region’s corporate health amid worries about an economic slowdown and damage from the prolonged U.S.-China trade conflict.

Companies in defensive and growth business, from consumer staples to technology have been investor favorites during the rate euphoria, but they look particularly vulnerable. Cyclical stocks like autos and banks already reflect a grim outlook.

There is a silver lining. For the first time since late 2017, European companies will outperform their U.S. counterparts, which are expected to show an earnings contraction. A lot of that stems from skewed year-on-year comparisons after the White House introduced hefty tax cuts.

Europe’s economy has also started surprising to the upside, while the U.S. economy has underwhelmed, according to Citigroup (NYSE:) analysis.

But otherwise things have been increasingly downbeat. Heading into the earnings, 3.5 times more companies have been making negative announcements than positive for the second quarter, the highest since the first quarter of 2016, according to Cau.

“Q2 earnings are unlikely to impress, and despite lower expectations, stocks may not all be immune to disappointment,” he said.

Aside from BASF, airlines from Lufthansa (DE:) to Ryanair (I:), German carmaker Daimler (DE:) and chipmaker Siltronic (DE:) have all warned of weaker-than-expected results.

After a brief hiatus in May, analysts have resumed cutting earnings forecasts even as stock markets have rallied. Expectations for full-year growth are dimming as well — the consensus is 4.1%, the lowest since 2016 and half the levels forecast at the start of the year.

Aside from headline numbers, investors will also be keeping tabs on capital expenditure plans for signs that the protracted U.S.-China trade conflict and worries about trade threats spreading to Europe are curbing spending.

Even with the reduced expectations for the second quarter, don’t rule out bad surprises in the second half.

“We’re likely to witness more warnings in the later part of the year than during the second-quarter reporting season,”, said Vincent Manuel, chief investment officer at wealth manager CA Indosuez.