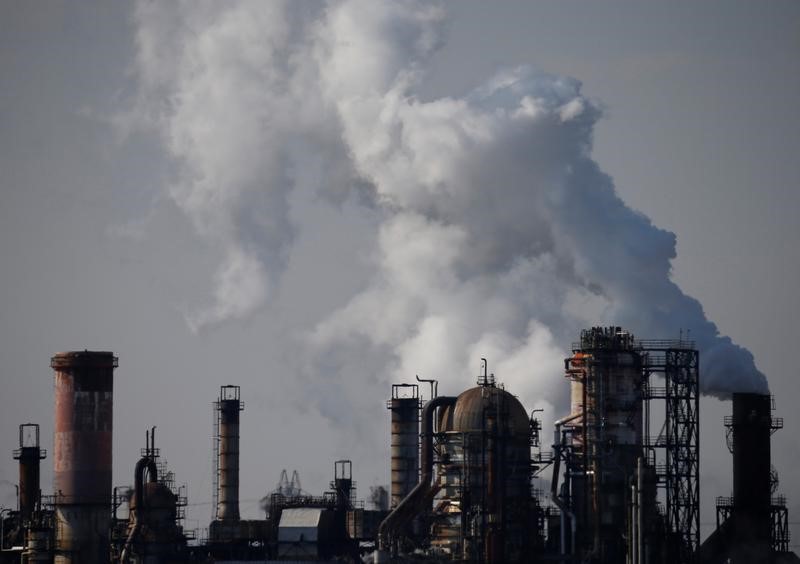 © Reuters. Steam is emitted from factories at Keihin industrial zone in Kawasaki

TOKYO (Reuters) – Japan’s factory output likely picked up in April, reversing the decline seen in the previous month, a Reuters’ poll found on Friday, although the U.S.-China trade war is expected to prevent a more meaningful recovery in months ahead.

Industrial production was forecast to rise 0.2% in April from the previous month after a 0.6% fall in March, the poll of 16 economists showed.

The expected small gains in the data were supported by firms’ front-loading some production ahead of Japan’s 10-day holiday from late April to early May to celebrate the accession of the new emperor, analysts said.

But falls in demand for IT-related products such as electronics parts and devices weighed on the factory output, they also said.

“Firms may cut their production or draw down an inventory in May, so it requires to examine manufacturers’ production forecasts to see the trend,” said Koya Miyamae, senior economist at SMBC Nikko Securities.

“Also we expect an adverse impact from an escalating U.S.-China trade war will appear in the data.”

The most recent trade data showed Japan’s exports contracted for the fifth month in April due to a slump in shipments of chip-making equipment to China.

The trade ministry will publish April factory output and manufacturers’ production forecasts for May and June at 8:50 a.m. May 31, Japan time (2350 GMT May 30).

The poll also showed Tokyo’s core consumer prices (CPI) index, which includes oil products but excludes fresh food prices, was expected to have risen 1.2% in May from a year earlier, compared with a 1.3% increase in April.

A slowdown in electricity and gas price rises capped gains in the index, while an increase in package tour fee and accommodation expenses due to the nation’s long holiday helped Tokyo’s core CPI, analysts said.

The jobless rate likely improved to 2.4% in April from 2.5%in March, and the jobs-to-applicants ratio was seen steady at 1.63.

The economy in the first quarter grew unexpectedly accelerated but the surprise expansion was mostly caused by imports declining faster than exports, showing both external and domestic demand were weak.