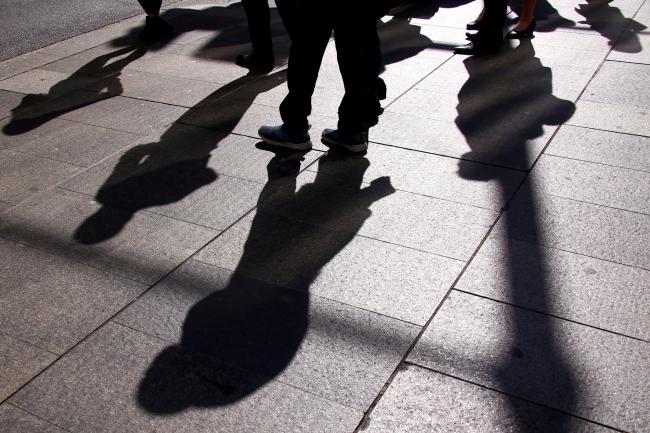 © Bloomberg. Pedestrians cast shadows on the ground as they walk in the central business district of Sydney, Australia, on Wednesday, May 15, 2019. Australia’s economy has been weighed down by a retrenchment in household spending as property prices slump and slash personal wealth. An election Saturday is likely to see the opposition Labor party win power and lift spending further. Photographer: David Gray/Bloomberg

(Bloomberg) — Australia’s jobless rate held above 5% in May despite a surge in hiring, underscoring the Reserve Bank’s challenge to drive down unemployment and stoke inflation.

While the economy added 42,300 roles last month, new entrants were absorbed by a jobs market that swelled to a record, the statistics bureau said in Sydney Thursday. That left the jobless rate at 5.2%, which is well above the 4.5% level the RBA estimates is needed to revive price pressures.

The result was further diminished by most jobs being part-time — potentially workers hired for the May 18 election — and fewer hours worked, suggesting a less robust labor market and likely explaining the currency edging lower. RBA Governor Philip Lowe resumed cutting interest rates last week after a three-year hiatus as he bids to spur hiring and return inflation to target.

“The data confirm the RBA’s view that the economy needs to generate more jobs to reach full employment, and that policy loosening — which will stimulate domestic and external demand — is needed to achieve this,” said Sarah Hunter, head of macroeconomics at BIS Oxford Economics in Sydney. “We expect the RBA board to follow June’s interest rate cut with two more this year.”

Australia’s labor market has shown surprising resilience as hiring persisted despite weakness across much of the economy. One explanation is that much of the hiring is coming from government-related programs that are impervious to prevailing economic conditions.

Lowe has made clear that easing monetary policy isn’t the ideal path to boosting hiring and investment, and has urged the government to undertake structural reforms. Following its surprise re-election last month, the government is trying to pass tax cuts that Commonwealth Bank estimates could provide stimulus equivalent to two quarter-point rate cuts.

For much of the past year, Australia’s debt-laden households have hunkered down and cut spending as they grapple with stagnant wages and watch falling house prices erode their wealth. Consumption accounts for almost 60% of GDP and weaker spending has slowed economic growth.

Lowe signaled last week the RBA is likely to cut rates again, and two sentiment surveys Wednesday suggested this will be necessary as the first easing failed to shift the needle on confidence.

“The headline jobs increase was nearly entirely driven by growth in part-time employment and this is not the sustainable employment growth the RBA wants to see,” said Kerry Craig, global market strategist at JPMorgan (NYSE:) Asset Management. “Meanwhile, the decline in hours worked is not great for the consumption outlook.”

U.S. hiring races to record high in May, layoffs abate By Reuters